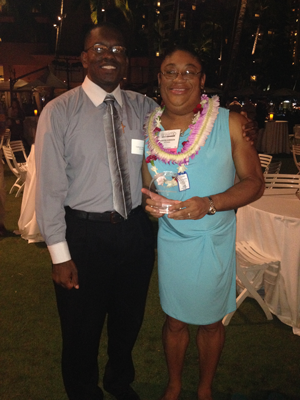 It's official! I am a 2014 Pacific Business News Women to Watch Honoree! Yipee!  It's such an honor to receive this award. There were more than 30 nominations and only 17 women were honored. To hear the accomplishments of the women who were honored humbled me. As I look at this award on my desk, I feel a surge of inspiration and determination to live up to the title of “Woman to Watch”.

Last evening, many business owners and professionals looked at my business in a whole new light. Most of my conversations with attendees started out as: “KR Design? What does your company do?…Social Media? Oh wow!” KR Design was starting to build credibility in an arena that we had never been exposed to. It was such a great feeling!

So, how does social media fit into all of this? I'm glad you asked! Here's how it works…

1. Visibility is what started it all…
To the 550+ people attending this event, KR Design was just a name of a business where the owner was going to be recognized. Some people who attended the event knew who I was but to most attendees, I was just a person with a lei and a special name tag. Also, Pacific Business News is one of the largest publications that is read by readers on the island. To be featured in their newspaper numerous weeks in a row had people intrigued about who I was and what KR Design can do for their business.

2. KR Design became a company
As my name was announced and I made my way to the stage, something magical happened. People began to take notice of me, my company, and my business endeavors. KR Design wasn't seen as a small business with a small staff and personnel. KR Design is a company in every sense of the word and its owner, Kristen Robinson, is a professional. To be recognized with other big name Hawaii companies really boosted our credibility.

3. They're Watching Me!
Now I have this eerie feeling that people are going to be watching me now. I've seen an increase already in social media and web traffic from this event. Many attendees took notice of who I was and my company. How do I know this? After the awards ceremony, there was a networking reception, and some of the attendees and honorees stopped to chat. Many were impressed that I had done business in Hawaii in such a short amount of time and was recognized for this honor.

Thanks to this honor and recognition, I have numerous possibilities. There are many people to keep in touch with and follow up with to start new relationships that could mean business. To make this accomplishment really count, I will be engaging more on social media with my new award. Capitalizing on this new found visibility is key in gaining more opportunities.