Is Your Resistance Keeping You From Growing Your Business? 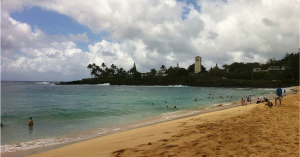 My husband's best friend is visiting from 29 Palms this week. I'm so honored that he decided to spend his birthday week with us! It's been so much fun to use him as an excuse to do all the things we've ever wanted to do in Hawaii. He even had a list of things he wanted to do during his visit. He's seen Pearl Harbor, hiked Diamond Head, visited the blow hole, ate at food trucks, went to a luau, and of course the beach. We decided to go to Waimea Bay on the North Shore. I have never been there, so I was really looking forward to it!

What I wasn't looking forward to was the ferocity of the waves. Of course on this day, the waves were breaking late on the shore and were a little choppy. The lifeguard kept repeating warnings about how dangerous it was for little children to be in the water and that they had to be accompanied by an adult. So, you get the idea: rough waves did not equal the leisurely swimming in the ocean, which I was planning for.

My husband took me to the more calm side of the bay and we got in the water. I realized that there was a difference between “swimming in a pool” and “swimming in the ocean”. I was getting knocked around and even being dragged up the shore with the current. I just couldn't win. Either water salt water was in my mouth or up my nose (not the best feeling) or I thought I was hitting solid ground and the sand beneath my feet took a nosedive so I sank beneath the waves. It was not one of my best moments and I knew my husband was trying super hard not to laugh at me. At one moment, I just gave up. I sat on the shore and just watched him swim for a while and I refused to go back in the water.

My husband came on the shore and encouraged me to get back in the water. He explained the reason why I was getting knocked around so much was because I was resisting. “The current is strong,” he explained. “Just let it take you.” So, I tried it. When the waves came, we floated on top of them and let them carry us back to shore. When the current was going back out to sea, we let it carry us. Sure enough, we would end up back in the same place we started.

And for some reason, a lightbulb went off. How many times do we resist something that is right in front of us or at the tip of our nose when it comes to our business? How much energy do we spend fighting it?

What if we stopped fighting and resisting? What if we just went with the flow? It made me think of numerous times in my business when I resisted something and finally because I was so tired of resisting, I just went with the flow. It became so easy when I stopped resisting. Sometimes in our business, the best things are right in front of us. But we're so caught up in resisting it and not going with the flow that we truly miss out on all the good things it could offer us.

Most recently, was my online radio show: Military Women In Business. When the opportunity was presented to me, I resisted and resisted. I didn't want another thing on my plate for my business. It also didn't make sense to me: why would I create something that I have to build? I'm already building enough things in my business. The more I resisted, the more the opportunity was persistent. I sat down and really thought about what the benefits were to having an online radio show.

What I found was that having my show, Military Women In Business, allows me to make a bigger impact and reach more military spouse entrepreneurs. I get to showcase guest experts who I know, like, and trust, to help my audience grow their business. It gives me an excuse to approach big names in the military spouse space and ask them to be a guest on my show. Military Women In Business is also another revenue stream for my business because of sponsors and commercials. And, it doesn't take up much time as I originally thought. I'm finding that I love interviewing people and the technical aspect really challenged me to stretch my skills.

As for my time in Waimea Bay, I had fun once I stopped resisting and even managed to float on top of the waves instead of being underneath them! So, what are YOU resisting in your business? How do you need to go with the flow? Comment below and let us know!