How A Simple Decision Changed My Business 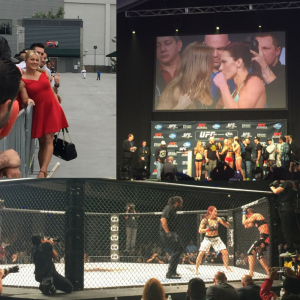 My anniversary present from my husband was awesome! He whisked me away to Los Angeles, CA to see Invicta FC 11 (women's mixed martial arts). This wasn't any ordinary event because Cris “Cyborg” Justino was the headline for Invicta's main event.

Just a little background on “Cyborg”: she's from Brazil, she's only had one loss, and most of her fights end in the first round by knockout. She's also the same woman who defeated Gina Carano in 2009 by knockout in the first round. She's a bad woman! (By the way, the fight we saw only lasted 46 seconds. And yes, it was a knockout!)

Seeing Cris “Cyborg” Justino come out the tunnel for her fight made me think of her story, her journey and how the decisions in her life and shaped her fighting career. She's made some mistakes but the one thing that I'm loving about her right now is her focus. Her focus to stay the Invicta champion and to take it to the next level by being a UFC champion.

On the plane ride home to Hawaii, I had my own decision to make. I needed to figure out if I wanted to focus on assisting entrepreneurs with their social media or being a business mentor to military spouses. I had been going back and forth for a couple of months and couldn't make the commitment to focus. Since I had not made a decision, everything seemed to be in chaos.

I needed to make a decision and stick with it!

Then I remembered something my mentor, Lisa Sasevich tells us about making decisions. Once you make a decision, things start to fall into place. Everything lines up when you make a decision because you're also in alignment with what you're committed to. When we landed in Hawaii, I knew EXACTLY what I wanted to do. When I made the decision in my heart and declared it, I felt so happy. It was like a big weight was being lifted off my chest and everything started to make sense.

I decided to be the Military Spouse Business Mentor and serve military spouses with their businesses!

And now, looking at my business, everything looks simple. The decisions I have been agonizing over have been made and with a new direction, I feel more excited about what's coming up next for KR Design. It sounds weird that just one simple decision could make such a difference. Do you want to know the best part of making this decision? The best part is that I'm allowing myself to shine in an area that I know I'm best at. And as I become a better business mentor for military spouses, I will be making a difference in people's lives and the world.

So, my question to you is: “What decision have you been wrestling with? What are you going to focus on and commit to?” Comment below! I'd love to hear it!​