What Were YOU Afraid Of? 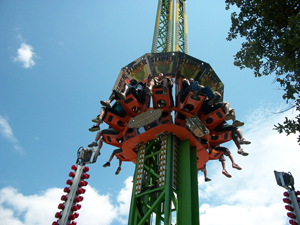 A ride at a fair that I had never rode before. It took a lot of courage to get on!

Even though I love speaking, something about hosting a webinar is very scary to me. One would think that since I am a speaker, that webinars would be easier. It's like talking to yourself without all the people staring at you right?

At first, I thought it was because I can't physically see my audience when I'm on a webinar. With speaking, I can feed off of the energy of my audience and they can SEE me! As I thought about it and thought about it, I finally realized why hosting a webinar was so terrifying to me. I was scared because it was something that I had never done before.

Many negative thoughts ran through my mind. “What if people don't show up?”, “What if people LEAVE before I'm done?”, and on and on. Add to the fact that I was advised by several colleagues and mentors that it was the worst time to host a webinar. “Why now?”, they asked. “Is it really going to make a difference?”.

As true as it was, I had to do it. I had to do it for myself. If I didn't do it, I knew I would lose my nerve. When I finished my first webinar, my thought was “What was I afraid of?”. Now, it seems so much easier and comes more naturally. The one thing that paralyzed me with fear, was just an obstacle.

And even though it didn't go as well as I planned, I learned some things. I can't wait to correct my mistakes and make my next webinar event better! Sometimes, social media marketing seems that way. It seems so daunting and complicated that we don't ever want to think about it and the fear cripples us from the potential of what our business could be. Don't let it get to you. Once you've tried it, it gets easier. The key is to keep doing and be consistent. Isn't that how you get better at anything?

Take the leap and join me on my “5 Social Media Secrets You Need To Know To Get MORE Customers and Boost Sales in 2014!” webinar encore. Rise from your fear of doing something new and unknown and register here. You'll be so glad you did!