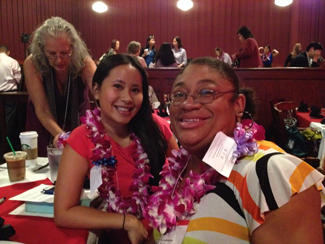 Vivian Enos, my fellow panel speaker, and me at the Social Media Bootcamp

Recently, I was a speaker at Social Media Bootcamp for Recruiting, Staffing, and Human Resources. Talk about being a fish out of water! I knew nothing about the human resources, staffing, recruiting or the industry itself. To make matters worse, my topic was Google+. Google+ is my weakest social media platform. Luckily, I wasn't alone in this arena. It turns that there were many people who had set up their Google+ profile and had done nothing with it. Whew! It was great to connect with the audience that way, being on the same page with them.

That wasn't the only thing I took away from Social Media Bootcamp. Here are my top 10 takeaways from this awesome event…

1. Being funny and making it fun goes a long way
One of the attendees attending the event said that he really liked my presentation as a panelist. I was really surprised because I had just met this attendee yesterday! He said that my presentation and sitting at one of my roundtable sessions had inspired him to check out Google+ and to really make time for it. I asked him if there was anything special that I had said and his response was this: “You made it fun!”

2. It's ok to tweet while people are talking
Being in the presence of other social media minded people was great! It was considered good etiquette to tweet and post about nuggets of wisdom you learned about. For the first time, I felt so comfortable tweeting and posting photos on Facebook while someone else was talking. That doesn't happen at other events that I go to.

3. Social Media is a state of mind
At one of my roundtable discussion sessions, I explained that social media is a state of mind. One of the reasons why businesses fail at social media marketing is because they don't change their frame of mind. It becomes something “to do” rather than something that needs to be a part of their overall marketing. You have to constantly be thinking about it. For example, I had to keep reminding myself to take photos at every opportunity and post them so that my audience would know what was happening in real time, like they were there with me.

One of the things that happened during my Google+ presentation as a panelist, was that one of the attendees was using Google+ in her recruiting efforts. As she was sharing her success, I could see many of the other attendees nodding their heads and taking notes. I shared the basics of Google+ and she shared great examples, the attendees learned quite a bit about Google+ and tips they could take back to their office and immediately implement.

5. Being uncomfortable only lasts so long
Remember how I said I knew nothing about the human resources, staffing, recruiting industry? Now imagine giving a presentation to an industry you know nothing about on a topic that's not your strongest. Not a good, warm, fuzzy, feeling. As luck would have it, I was on the 2nd panel in the afternoon. As the day wore on, I became more comfortable hearing the first panel and conversing with attendees. I began to figure out what the audience wanted me to teach them. I also had some suggestions from the coordinators of the event. When my turn came, I was still nervous but not as petrified as I was before. My presentation turned out great thanks to listening to what their fellow industry people said in their presentations.

So, that's my top 5 takeaways! Comment below and let me know what your favorite takeaway was! Click here to see Part 2 of my top 10 takeaways!